Welcome to the Avengers Assemble The Animated Series Wiki[] 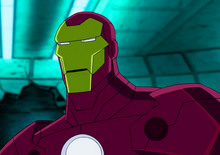 Iron Man is the leader of the Avengers. Originally disbanding the team after feeling as though the world did not need them anymore, Iron Man called the group together again after being defeated by Red Skull following what he believed to be the death of Captain America, whom he thought was dead. After arriving to save his teammate, he was attacked by the Red Skull in his body and soon had his arc-reactor and armor removed by M.O.D.O.K. after having defeated Red Skull and returning Captain America to his own body. Narrowly surviving the ordeal, he was placed under strict monitoring by his caring teammates and returned to the Avengers Mansion, where he was healed from his injuries via the use of several cords placed in his chest by Falcon, the team's newest member and a recipient of the Avengers Protocol.

Community content is available under CC-BY-SA unless otherwise noted.